An industrial robot that works side-by-side with people 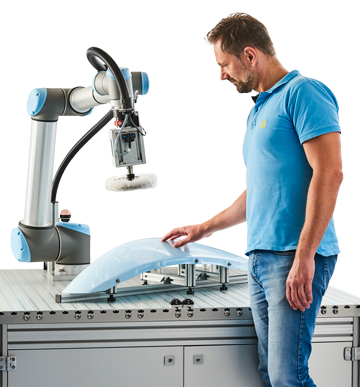 The UR10e collaborative robot is a robust 6-axis industrial robot for use as a companion to workers performing routine assembly production tasks.  The UR10 e-Series collaborative robot, or cobot, allows manufacturers to make incremental automation improvements possible because in most cases it requires no safety guarding, and doesn't have to be placed permanently in one location.  It's footprint is less than 7.5".

Each of the Universal Robots UR10e's 6 axes, or elbows, safely rotates 360 degrees.  The robot's reach radius extends to 51.2 inches, while lifting a payload of up to 27.5 lbs.  It can lift that much and reach that far all day, every day without ever involving your EHS staff.  Read more specifications here. 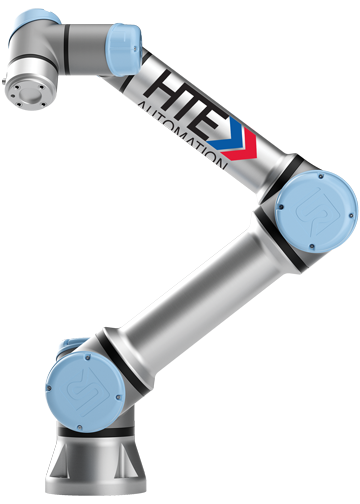 Getting started with the UR10e cobot is a quick process.  Initial orientation and module-based training is provided tuition-free on the web in the Universal Robots Academy.  Completion of this introductory training requires about 87 minutes.

Then, when your robot arm is delivered, unpacking, mounting, and programming this industrial robot's initial movements is frequently accomplished in less that 60 minutes.  The cobot's small size, flexibility, and programming ease allow you to retask it throughout the day or week as needed.

Some tasks require greater touch sensitivity than others, an enhanced capability incorporated in the redesigned e-Series robots, each of which includes a force torque sensor which delivers human-like touch sensitivity.

Additionally, some tasks require a high level of pose repeatability, something the new UR10 eSeries delivers at +/- 0.05mm, or about 1/2,000th of an inch. 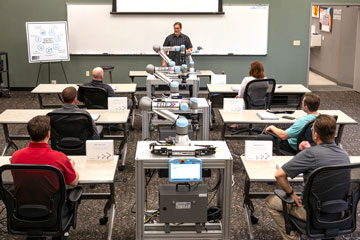 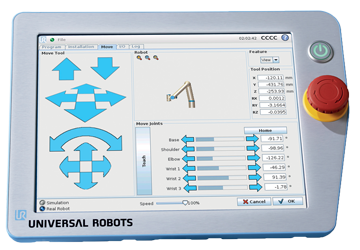 Training at a greater depth is available locally at either of the two HTE Automation Universal Robots Authorized Training Centers, one in St. Louis Missouri, and another in Lenexa Kansas, in the Kansas City metropolitan area.

The Universal Robots Teach Pendant provides an elegant means of teaching the robot what you want it to do.  Once the 2-day UR Core Training class has been completed, students will have a significant matery of this important tool.

HTE Automation works together with Universal Robots and the extensive Universal Robots Plus program partners to help manufacturers in Kansas, Missouri, and Illinois operate more efficiently, thereby becoming more competitive.  Call us at 800-444-4831 to explore how we can work together to accelerate your company's productivity.